On December 16th the Washington Post carried an article by Louise Loveluck and Mustafa Slim about the Basra Children’s Hospital which was meant to be among the best in the country and the region. After former President George W. Bush invaded and occupied Iraq in 2003, his wife Laura pressed the government to build a “world class hospital” for children afflicted with cancer.
More than $100 million was invested in the facility.
Today the hospital is a disaster zone. The authors wrote, “Eighteen years later the hospital is a casualty of an Iraqi health care system so riddled with corruption and damaged by neglect that World Bank figures put it among the region’s worst.” They admit that Iraq’s medical sector has been battered by decades of war and sanctions” but put the main blame on the rampant corruption that has infected that country since the US occupation.

The authors do not, however, specifically accuse US repatriated Iraqi opposition exiles of mismanagement and corruption. They, as my Iraqi friends used to say, “rode into Baghdad on the back of US tanks” and were parachuted into power by the US although many had been living in and were loyal to Iran rather than their own country. While they are to blame for corruption in general, the health system has been pillaged by ministers and officials affiliated with nationalist Iraqi cleric Muqtada al-Sadr who remained in Iraq during the reign of Saddam Hussein and has become a major figure on the Iraqi political scene and campaigned against corruption.

Graft, however, provides only one explanation for why the Iraqi health care system is in such bad condition. To understand the current state of affairs it is necessary to go back to the 1990 sanctions regime and the January-February 1991 war waged by ex-President George H W Bush (father of George W) to drive the Iraqi army from Kuwait and the war’s aftermath. It must be remembered that violence continued after the war formally ended because George H W urged Iraqi Shias and Kurds to rise up against the secular Baathist regime under President Saddam Hussein — who crushed the revolt.
In June 1991, former UN High Commissioner for Human Rights Prince Sadruddin Aga Khan led a UN mission comprising experts to assess the situation in Iraq. In his introduction to the report presented to Secretary General Perez de Cuellar, the prince wrote, “..it is evident that for large numbers of the people of Iraq, every passing month brings them closer to the brink of calamity. As usual, it is the poor, the children, the widowed and the elderly, the most vulnerable amongst the population, who are the first to suffer.” Due to the damage and destruction bombing inflicted on power plants and water treatment facilities and the absence of spare parts because of sanctions, four times the number of Iraqis suffered from diarrhoeal diseases than before the US intervened with sanctions and war. The supply of food was insufficient and inflation made it difficult for Iraqis to get enough to eat. The health service, once one of the region’s best, was in crisis due to a lack of medicines, medical equipment and devices, and ambulances. The mission drew up costs of restoring each sector.
The estimate for health was $500 million. Of course, no money materialised because of Washington’s determination to punish Iraqis for failing to overthrow Saddam Hussein. Nevertheless, the UN experts pointedly argued that Iraq itself could pay for reconstruction if it could export oil as needed. This did not happen. Half a million children were said to have died between August 1990 and 1996, when the UN oil-for-food programme provided some relief. But it was not designed to enable Iraq to repair its infrastructure. I visited Baghdad in 1992 and 1993 to attend conferences staged by a Jordanian doctors association on the situation in the rapidly deteriorating Iraqi health sector. At that time cancer cases had risen due to water, air and soil pollution from oil exploration and production and from depleted uranium shell casings, bomb fragments, bullets and, especially, fine particles from shells fired by the US and Britain. Depleted uranium is used to harden the explosive noses of weaponry.
In a December 7th, 2018, article in Counterpunch Jeffrey St. Claire revealed that more than 970 radioactive missiles had struck Iraqi targets during the 1991 war, raising the incidence of leukaemia in Iraq by 600 per cent. Oncologist Dr. Jawad al-Ali told St. Claire, “The desert dust carries death. Our studies indicate that more than forty percent of the population around Basra will get cancer. We are living through another Hiroshima.”
Most of the victims have been civilians, including children. Until 2003 the US-controlled sanctions committee rejected Iraqi requests for cancer drugs, equipment for treating the disease and morphine to ease pain, St. Claire said. Basra, in particular, has been very hard hit.
Perhaps Laura Bush gave her support for a cancer hospital for children in Basra because she felt guilty about or empathy for war victims because her father-in-law used such radioactive weaponry in his war on Iraq and her husband made the situation worse by invading and occupying Iraq. He handed power to residents and imported expatriates who were out to make fortunes through graft rather than rebuild their country. While corruption did exist under Saddam Hussein, it was far less invasive, widespread and destructive than after the 2003 war.
I must plead that I have a special interest in what happens in Iraq. Over the years I visited the country many times and have good Iraqi friends who remained patriots opposed to both Bush wars although they have spent years abroad.
My dear Iraqi friend Nuha al-Radi, a ceramist and painter whom I met years ago in Beirut, survived Papa Bush’s war while living in Baghdad. She said the destruction of Iraq’s manufacturing plants and chemical facilities produced thick clouds of toxic pollution which left civilians choking and coughing for days.

She recorded the events of those terrible weeks in her brutal but hilarious “Baghdad Diaries,” published originally by Granta and later by Saqi Books in London. By 2003, Nuha had developed a malicious, rare blood cancer which killed her at 62 in August 2004. She blamed the cancer on depleted uranium dust and other pollutants in Baghdad’s atmosphere thrown up by Papa Bush’s hardnosed shells when they exploded at largely civilian infrastructure targets.

Most of the victims have been civilians, including children. Until 2003 the US-controlled sanctions committee rejected Iraqi requests for cancer drugs, equipment for treating the disease and morphine to ease pain, St. Claire said. Basra, in particular, has been very hard hit. Half a million children were said to have died between August 1990 and 1996. 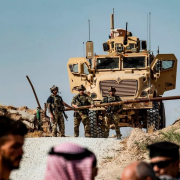 US army builds second base in Syria’s Hasakah 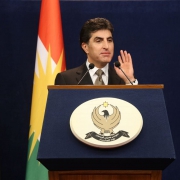 Iraq: US Ambassador Says Kurdistan Should Be Involved in Strategic Dialogue 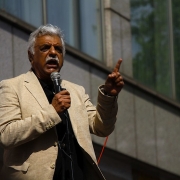 British Political Activist: The Best Thing the US Can Do for Afghanistan Is Stay out of it 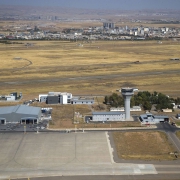 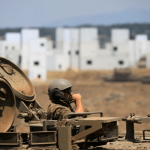 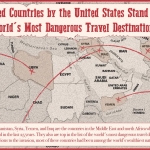 Invaded Country by The Unite State Stand as the World Most Dangerous Travel...
Scroll to top