In his message to 2021 Hajj, the Leader of the Islamic Revolution emphasized that over the last 150 years Muslim nations have mostly been subject to the aggressive western countries’ greed, interference and malevolence. Imam Khamenei also stressed that the Islamic nation must make up for the past and “resist” against such aggression. The following is the full text of Imam Khamenei’s message on the occasion of the 2021 Hajj rituals.
In the Name of God, the Beneficent, the Merciful
Praise be to God, Lord of the Worlds, and peace and greetings be upon Muhammad, his pure Household, his chosen companions and those who follow them until the Day of Judgment
Dear Muslim brothers and sisters throughout the world,
This year too, the Islamic nation has been deprived of the great blessing of Hajj. Thus, eager hearts filled with sadness and sorrow were deprived of the banquet at the honorable House that God, the Wise and Merciful, built for people.
This is the second year that the season of happiness and spiritual exaltation associated with Hajj has turned into a season of separation and regret. The tribulation of the pandemic and perhaps also that of the policies dominating over the Holy Ka’bah have deprived the eyes of the eager believers from seeing the Islamic nation’s symbol of unity, greatness and spirituality. Thus, this glorious, honorable summit has been covered with clouds and dust.

This is another test, which like the other tests that have come to pass in the history of the Islamic nation, that will be followed by a bright future. What is important is that Hajj remains alive in its true essence–in the hearts and souls of Muslims–so that now that its physical form is temporarily inaccessible, its exalted message not be diminished.
Hajj is an act of worship that is filled with mysteries and secrets. The exquisite formation and combination of movement and quietude in it build the identity of the Muslims and the Muslim community and display its beauties for the people of the world. On the one hand, it helps the hearts of God’s servants to spiritually ascend by remembering God, reciting supplications and being humble. And this brings them closer to God. On the other hand, through their similar garments and harmonious moves, it creates a bond between the Muslim brothers gathering together from the four corners of the world. It displays the most important symbol of the Islamic nation with all its meaningful, transcendent rituals, and it shows the determination and greatness of the Islamic nation to all ill-wishers.
This year, the Hajj ritual at the Great House of God is not possible, but paying attention to the God of the House, to remembering Him, to humility before Him, to supplicating Him and to asking for His forgiveness is possible. Being present in Arafah is not within our reach, but enlightening supplications are. It is not possible to stone Satan in Mina, but rejecting the power-seeking devils is possible everywhere. The harmonious gathering of individuals around the Ka’bah is not attainable, but the harmonious gathering of hearts around the illuminating verses of the Holy Qur’an and holding fast to the rope which God stretches out [Qur’an, 3:103] is a perpetual duty.
We who are the followers of Islam–and who enjoy a large population, vast lands, countless natural resources and nations that are aware and awake–must build the future with our assets and resources. Over the last 150 years, Muslim nations have not had any role in deciding the fate of their countries and their governments. Apart from a few exceptions, they have all been led and governed by transgressing western governments while being subject to their greed, interference and malevolence. Scientific backwardness and political dependence in many countries is the product of that passivity and incompetence.
Today, our nations, our youth, our scientists, our religious scholars, our civic intellectuals, our politicians, our political parties and our people must make up for that dishonorable, embarrassing past. They must stand firm and “resist” the aggression, interference and wickedness of western powers.
All that the Islamic Republic of Iran is saying that has caused the world of Arrogance to become despondent and infuriated is actually an invitation to this kind of resistance. This is a resistance in the face of the interference and evil of America and other transgressing countries so as to take the fate of the world of Islam in one’s own hands by relying on Islamic teachings.
Naturally, America and its cohorts are sensitive about the word “resistance” and have decided to show all kinds of hostility to the “Islamic Resistance Front.” Some regional governments’ cooperation with them is a bitter reality that strengthens those malicious acts as well.

The straight path shown to us by the Hajj rituals, by “Sa’i,” “Tawaf,” “Arafah,” “Jamarat” and the glory and unity in Hajj, is to rely on God, to pay attention to the never-fading power of God, to have national self-confidence, to believe in struggle and endeavor for religion, to show firm determination when moving forward and to have abundant hope for victory.
The truth of the realities in the Islamic region bolsters this hope and builds up this determination. On the one hand, the bitter events in the world of Islam, scientific backwardness, political dependence, and economic and social problems direct us toward a great duty and an untiring endeavor. Usurped Palestine is calling for our help. Innocent, bloodied Yemen torments every heart. The plight of Afghanistan concerns everyone. The bitter events in Iraq, Syria, Lebanon and some other countries–where the interfering, malevolent hand of the US and its cohorts is completely visible–is stimulating the zeal and determination of all the young people.
On the other hand, the emergence of the Resistance Forces throughout this sensitive region, the awakening of nations, and the motivation of the young, enthusiastic generation, make hearts overflow with hope. Palestine is wielding “the sword of Quds” in all its territories. Quds, Gaza, the West Bank, the 1948 Lands and the Palestinian camps all rose up and bravely defeated the aggressor over the course of just 12 days. Yemen, which has been besieged and alone, has endured seven years of war, crimes, and the murder of innocent people by the evil, stone-hearted enemy. It has not surrendered despite a lack of food, medicines and other basic needs. On the contrary, Yemen has perplexed the enemy with its power and ingenuity. In Iraq, the Resistance Forces are powerfully pushing back the occupying US and its puppet DAESH. With their loud cries, they are eloquently expressing their firm decision to confront every act of interference and malice on the part of the US and its cohorts.
The American propaganda effort to distort the will, demands and actions of the brave youth and forces of the Resistance in Syria, Lebanon and other countries and to ascribe them to Iran or any other reference point, is an insult to those valiant, vigilant youth. And this stems from America’s deep ignorance about regional nations.
This ignorance led America to be humiliated in Afghanistan. After that raucous invasion 20 years ago and after having used weapons and bombs against defenseless people and civilians, it became stuck in a quagmire and eventually withdrew its forces from that country. Of course, the vigilant Afghan nation should remain watchful concerning America’s tools for gathering intelligence and its soft-war weapons, and it must vigilantly fight them.
Regional nations have shown that they are awake and alert and that their path is different from the path of those governments that are even prepared to go as far as to give in to US demands over the vital matter of Palestine in order to keep it satisfied. These are governments that overtly and covertly create ties of friendship with the usurping Zionist regime. In other words, they deny the right of the Palestinian nation to their historical land. This is an act of stealing Palestinian assets. They did not find it sufficient to ransack the natural resources of their own countries, and they are now ransacking the resources of the Palestinian nation.
Brothers and sisters,
Our region and the swift, diverse events taking place in it are an exhibition showing us lessons and examples. On the one hand, we can learn the lesson of gaining power using resistance and fighting against the transgressing aggressors. On the other hand, we can learn that humiliation that results from submitting to them and showing weakness.
The true, divine promise is assistance for the fighters in the way of God, “If you aid the cause of Allah, He will aid you, and plant your feet firmly.” [Holy Qur’an, 47:7]
The primary result of this struggle in the way of God will be to prevent America and other international aggressors from interfering in the affairs of Islamic countries, God willing.
I ask God, the Exalted, to assist the Muslim nations, I send greetings to the Imam of the Age (may our souls be sacrificed for his sake), and I ask God to elevate the status of the great Imam Khomeini and our illustrious martyrs.
Greetings to God’s righteous servants. 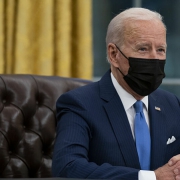 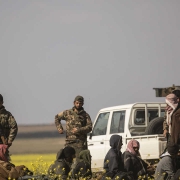 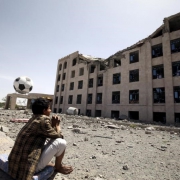 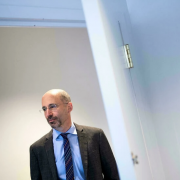 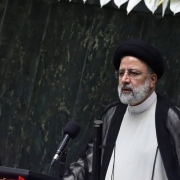 Iran Calls on US to Drop ‘Its Addiction to Sanctions 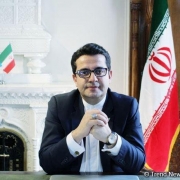 America’s War For The Greater Middle East: A Military History 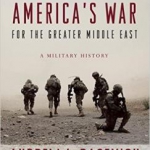 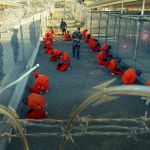